Anglers are in love with trout, and there's several reasons why.

First is the sheer size that's available out there. A massive 83 lb lake trout was reeled into a fishing boat on the waters of the North West Territories. It was caught using a net, so the record isn't official, but it gives you a great idea of what's in store for you.

The second is the visual aspect. You wouldn't be able to spot most fish species without the aid of a fish finder, but trout are another story. It's not uncommon to witness a trout leaping from the waters to catch bugs or spotting them weaving through the shallows. Being able to see and stalk your prey brings you a little bit closer to the basic instincts of hunting with your hands.

The third is the fight.  Due to their massive size they are able to keep up. No matter your size , you'll know you were in a struggle. Even though larger trout are hard to come by, smaller trout are abundant from coast to coast so there's no chance of getting bored.

Depending on where you live, you may be more familiar with different species of trout than others. Here's what Canada - and the rest of the world - has to offer. 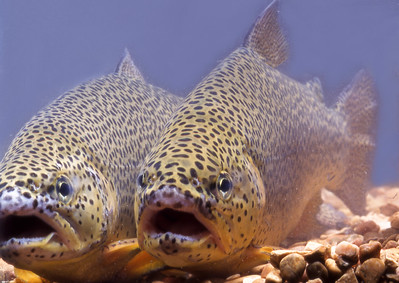 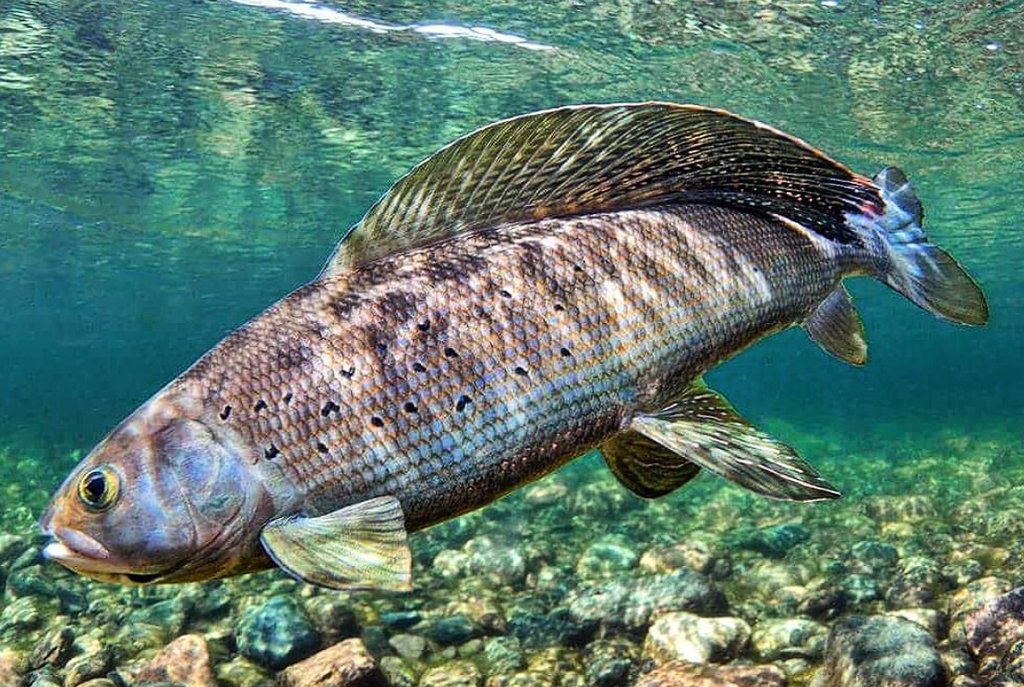 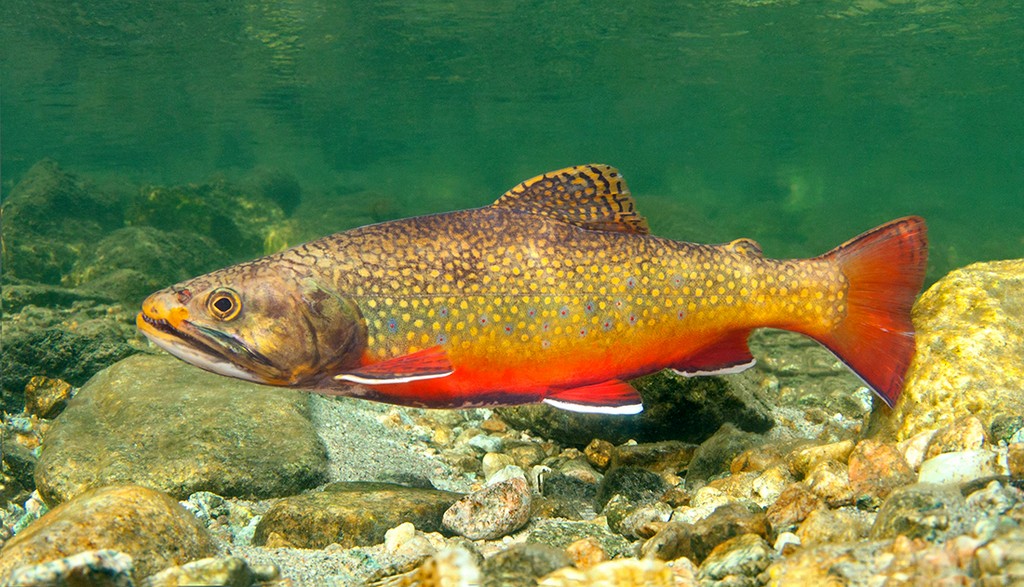 The smallest - reaching 7 lbs - of Canada's remote stream and river trout. Popular amongst fly fishers due to their bright colours and tough fight. 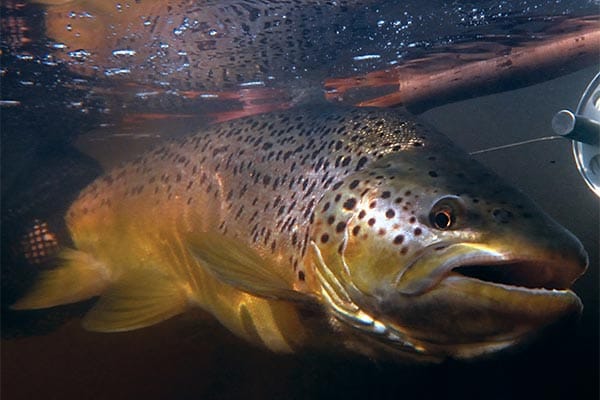 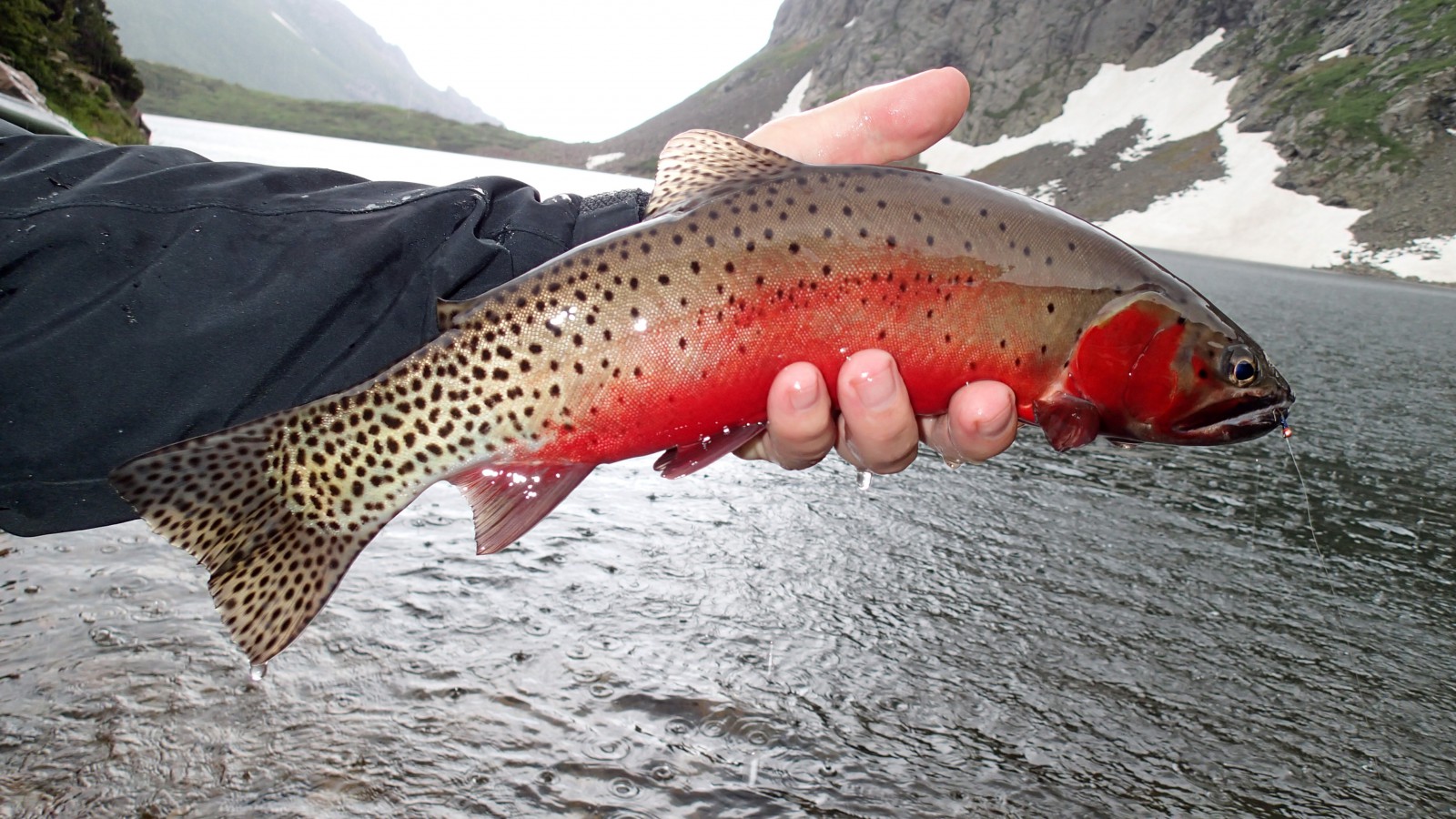 Found in the cold streams of Alberta and British Columbia, this part of the Trout family is named after the telltale orange/red slashes of colour under their mouths. 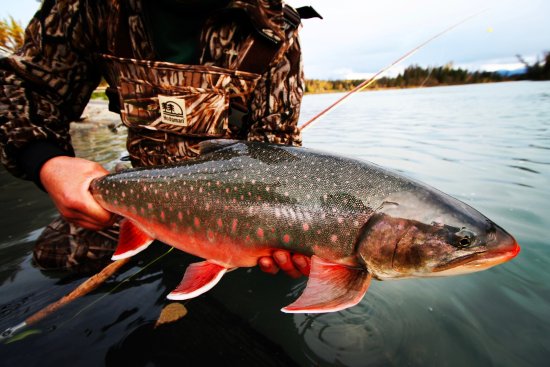 Anglers love this aggressive fish found on the Northern coasts of British Columbia. They strike at pretty much anything you put in front of them. 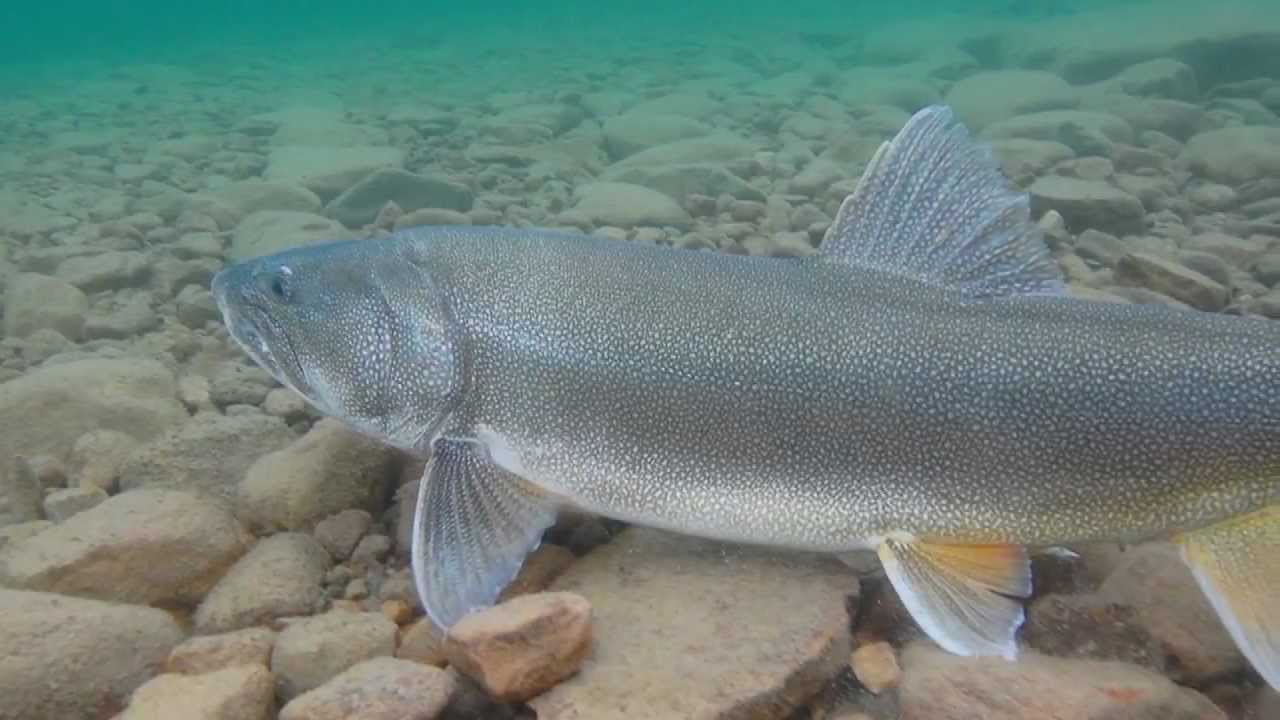 This Canadian favourite is found a little closer to the boarder. Although, they do prefer the water a little colder. You'll have to wait for Spring or Fall to find them in the shallows. 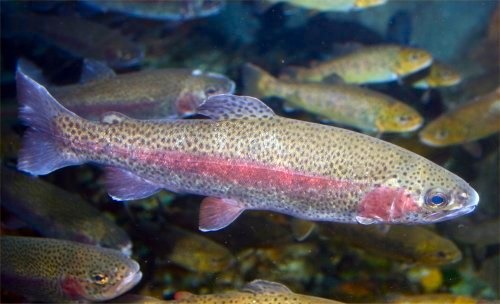 Olive-green colouring, black spots all over, and - once they've reach adulthood - bright red stripe from gill to tail give this fish it's calling card name. 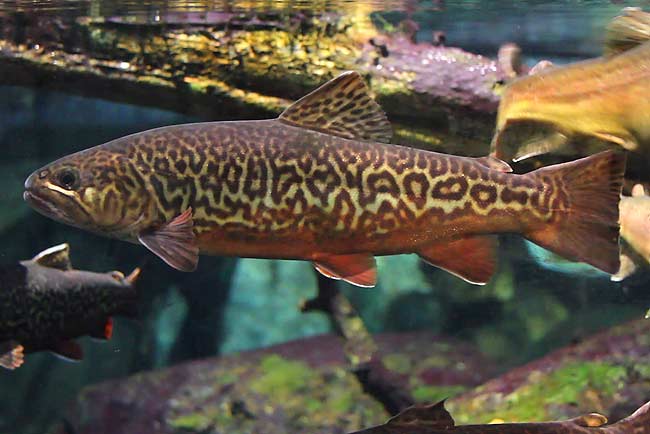 Trout are closely related to Salmon and Char. Aside from Steelhead (rainbow trout) who spend a few years in the oceans, trout are almost exclusively freshwater fish.  Find them in clear 10–16 °C freshwater streams, rivers, and lakes.

Their colours and patterns are based on camouflage against their surroundings. So, expect a fairly drastic change in looks depending on which lake or stream you find them in.

Although their appearance can drastically differ, they're all genetically the same.

Brook and River trout live up to around 7 years old while they're lake-dwelling counterparts can thrive for decades.

CutThroat, Bull, and Golden Trout records were all set by our neighbours to the South.

With their abundance from coast to coast and the sheer size of trout, it's no wonder why they are a Canadian favourite. There are 2 steps to catching any fish; knowing where they are and knowing what they eat. As far as food goes, trout are known to snack on:

Pretty simple right? For a successful day of trout fishing you don't have to bring much with you.

Trout are fairly easy to find too. They avoid predators. They avoid the warmer waters. They avoid having to swim against a current all day long. Look for them in the cover - logs, rocks, vegetation - and hanging out in calm water waiting for the current to deliver food.

You know how to ID it, how to find it, and how to catch it.

The only thing left is how to enjoy it. 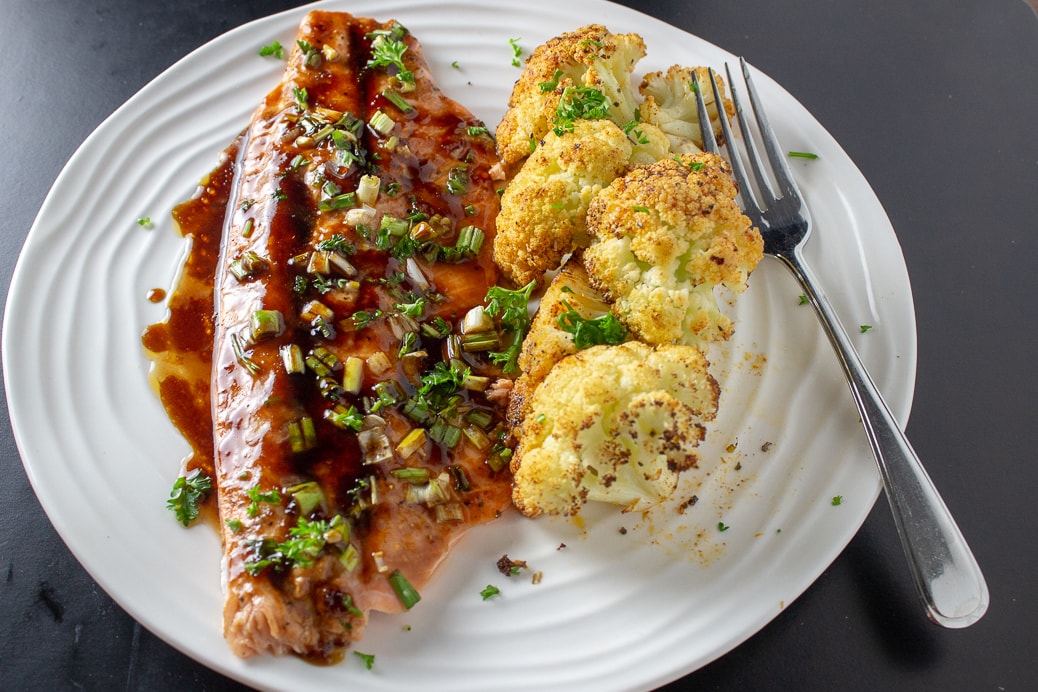 Preheat oven to 400℉ (205℃)
Mix all Maple Sauce ingredients together and whisk until uniform. Microwave for 45-60 seconds or until thickened.
Line and oil a backing pan. Place trout fillets and sprinkle salt, pepper, and chopped green onion to taste. Drizzle half of Maple Sauce. Roast for approximately 10 minutes (longer if fillets are thick).
Plate fillets, drizzle remaining Maple Sauce and garnish with chopped parsley.

- 20-Minute Burrata salad
- Rainbow Vegetable Skewers
- Charred Cauliflower with Garlic Tahini Sauce
Trout tend to spend about 80% of their day looking for food, so there's a good chance they'll be hungry when you're out on the water. But, you still have your work cut out for you. They have excellent eyesight and are always on alert for danger. You'll have to be stealthy to be successful when angling for trout.
With the fight they provide, their beautiful colouring, and tasty flesh, the effort is definitely worth it.
Is trout your favourite species to fish for? Do you have a better recipe?
We'd love to hear about it.